What Does the Rise of AI Mean for Banking, Investing, and Economic Development? 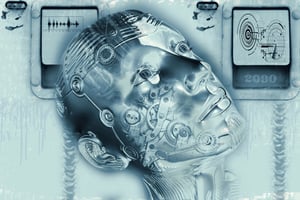 According to Hollywood, bad things happen when society hands over decision-making power to machines. From the Terminator to the Matrix to I, Robot, the big screen is filled with dystopian tales about artificial intelligence (AI) wiping out the human race.

In truth, we’re already surrounded by AI. To wit:

Even our smartphones can answer complex questions that once required long afternoons poring over encyclopedias at the local library. And the technology is getting better as machine learning and processing power both continue to improve.

In fact, many areas once considered the sole purview of “humans” are now within easy reach of artificial intelligence. Machines can already compose music, paint pictures and write poetry as well as — if not better than — those who have practiced these fields for decades.

This trend isn’t limited to the arts.

In banking and finance, for example, AI has started to replace “gut decisions” with hard, cold analysis. Machines can crunch data faster and more accurately than any person. The underlying algorithms can spot patterns, manage risks, and make split-second decisions that would require years of analysis if humans were doing all the heavy lifting.

If machines become smarter and faster, this has the potential to make everyone better off — but there’s also the very real risk that things could become worse.

How Artificial Intelligence Is Changing the Game
With enough processing power (and intelligence), AI has the power to make incredible predictions about the future. For example, if the price of orange juice goes up in Singapore, then with enough data, an AI might realize that the price of iron ore has a 70 percent chance of going down in Ontario.

There is clearly no direct link between citrus and raw metals — two completely unrelated commodities on opposite sides of the world. But with enough data-crunching capabilities, artificial intelligence could easily spot these types of correlations.

In fact, this is already happening with EquBot’s AI-powered stock market algorithm. Still in its infancy, this machine has managed to outperform the S&P 500. With more time, data and tweaks, there’s every reason to believe these predictive powers would only improve.

And not just when trading stocks.

With today’s AI technology, retailers already can predict when someone is pregnant (before the rest of the family knows).

In other words, AI has the potential to touch every aspect of our lives — from how markets move to what we do in the privacy of our homes.

Society isn’t necessarily ready for that.

Artificial Intelligence and the End of Imperfect Information

Let’s explore just one domain in which AI could revolutionize the landscape — i.e. economic development.

The financial world thrives on risk and uncertainty. Different actors will inevitably base their decisions using imperfect information. But if machines remove guesswork from the equation, no one has first-mover advantage anymore.

We all have the same “privileged” information, meaning if the price of orange juice goes up in one corner of the world, everyone knows there will be a corresponding dip in iron ore on the other side of the globe.

The decision-making process behind artificial intelligence happens largely within a “black box” environment. The architects of these algorithms understand how deep machine learning works, but they don’t understand how these self-taught machines actually reach their conclusions.

How do you troubleshoot (or control) steps that are completely hidden from view?

And don’t forget about cybersecurity concerns in a world governed by AI. This is a very real threat that comes in two distinct forms:

Should We Fear the Rise of Artificial Intelligence?

No one knows whether AI represents an existential threat or not. Futurists, economists and screenwriters all have very different opinions about the road ahead:

At this point, it’s impossible to say who is right.

Given how quickly AI continues to evolve, it seems almost pointless to ask. Whether we’re headed for utopia or destruction, the general trajectory isn’t really under our control anymore.

However, by asking these hard questions, we can potentially design stop guards and safety valves that keep us on track — at least a little bit longer.