What Does Facebook's Libra Mean for Online and Mobile Payments? 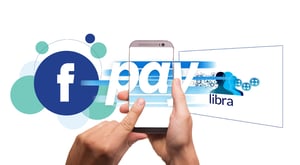 In June, Facebook announced Libra, a cryptocurrency that allows Facebook users to make purchases or send money to other Facebook users without any fees attached to these transactions. You can use it online, at exchange points that include certain retailers, through a third-party wallet app, or as part of Facebook’s Calibra wallet. It is set to launch for public use during the first half of 2020.

With such a large company putting its support behind blockchain and cryptocurrency, it’s important to consider how this might change the world of online and mobile payments. Perhaps this announcement is finally setting the stage for mass global adoption of this digital currency that has struggled to be understood or accepted. Some are even calling it the Internet of money ecosystem.

This venture goes beyond the Facebook team. Founding members include nearly 30 of the top payments, marketplace, and venture investing thought leaders who are all participating in shaping Libra. These include numerous recognizable brands, such as Mastercard, Visa, PayPal, Coinbase, eBay, Uber, Lyft, and Spotify to name a few. Also, social impact organizations and NGOs, such as Women’s World Bank and Kiva, have signed on as Founding Members, but will not be contributing any investment dollars.

All of these companies and organizations will take an active role in creating Libra’s governance and operating structures as well as investing in its launch to create a revolutionary global payments infrastructure. That makes it much bigger than just a Facebook payments feature.

The Components of Libra

The Libra ecosystem is made up of the Libra Blockchain, which was developed by Facebook engineers and uses an open source protocol. It contains a new programming language known as Move, which enables developers to create payments and financial services apps that run on top of the blockchain.

The Libra Blockchain has a single data structure that records transactions and makes this transaction history visible to others on the network. Similar to other crypto rails, it uses a decentralized structure.

Within this blockchain sits Libra, a new global currency with a value that is linked to low-volatility traditional currencies that include the dollar, pound sterling, and Euro. With this connection, Facebook is looking to position this currency as more financially stable compared to other cryptocurrencies that have shown extreme volatility -- part of the reason so many consumers and businesses have hesitated to adopt it.

However, gaining an understanding and willing audience is just half the battle. Facebook has to win over regulators who have also stalled on allowing cryptocurrency to be more widely used. To help regulators progress towards approving its use, Libra uses a new type of governance structure.

The Libra Association will be headquartered in Geneva, Switzerland, and governed by a Council and a Board of Directors. They will make decisions related to the vision, execution, monetization schemes, and roles and responsibilities of all participants. This governance structure would not include Facebook once it is done with development set to finish in 2019.

This revolutionary ecosystem will also introduce new cryptocurrency-based applications that will ride the Libra Blockchain rails and leverage the Libra currency. This includes Facebook’s digital wallet known as Calibra, which will also be available at some point in 2020 and provide cross-border P2P payment capability.

Calibra will be accessible across all Facebook properties, including Messenger and WhatsApp. Users will be able to download the app inside of those Facebook platforms or from Apple and Google app stores.

Facebook noted that Libra’s mission statement is to ensure everyone in the world has access to a free or low-cost bank account to empower them to operate a business or maintain control over any wealth they can build. Since there is no unified global payment platform, Facebook is hoping to prove that it’s possible to have a secure standardized system for payments that works across financial platforms, providing equal access to all types of transactions.

As Facebook sees it, providing financial freedom is another type of equality and a human right that should be afforded to everyone in the world. And, Libra is a step toward delivering on that mission. That means Facebook’s Libra could equalize online and mobile payments for all.

Beyond that opportunity, Libra might also disrupt other cross-border payment processes like remittances, including adversely impacting companies that specialize in these types of payments. Many in African countries rely on the remittances system to get funds they need. However, it’s been a costly system in terms of fees that Facebook’s Libra is looking to solve. The mobile money culture is so important to these developing countries that lack a banking infrastructure. And, with WhatsApp already in high use in African countries, transitioning to Libra should be a fairly easy and successful process.

While Libra is primarily designed for people without bank accounts, it has the potential to disrupt all of the online and mobile payment industry by finally proving that blockchain and cryptocurrency can be mainstream alternatives to traditional payments. It’s definitely worth watching in 2020 when it launches.