Not So Innocent After All: Stories of 5 Child Hackers 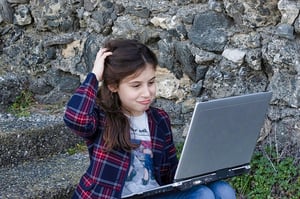 “It’s a Good Life” is a classic “Twilight Zone” episode in which a kid can read minds and transform adults into anything he wishes. The basic plot makes for great science fiction — especially for 1960s sensibilities.

However, there are modern-day corollaries that exist in the real world.

Many children today, for example, have the ability to hold adults hostage. Yet instead of using telekinesis or some strange alien power, the primary weapons of choice are just ordinary 1s and 0s (e.g., binary code).

In honor of National Cybersecurity Awareness Month (recognized each October), we wanted to highlight five of the most “dangerous” child hackers currently on the scene.

Frustrated by the parental controls that came with his family’s Xbox gaming console, Kristoffer Von Hassel managed to bypass the security settings and gain complete access. He also managed to log into his parents’ restricted YouTube account.

What sets Von Hassel apart from everyone else on this list is that he was only 5 years old when all of this happened.

Microsoft was so impressed by Von Hassel’s workaround that, after plugging the security hole, the company rewarded him with some money and a year-long subscription to Xbox Live. Microsoft also added Von Hassel to its official list of “security researchers.”

Betsy Davies was only 7 years old when she made waves by exposing a vulnerability in public Wi-Fi networks. After reviewing a brief tutorial on Internet connectivity, she was able to bypass one of the world’s most famous VPNs.

Fortunately, this experiment was done in a controlled setting, so no one was hurt. In fact, her technical prowess was featured in a public awareness campaign designed to highlight how easy it is to break into networks that were supposedly immune from amateur hacking.

Smartphone technology wasn’t very old when, in 2011, developers learned of a major vulnerability in Android and iOS operating systems. The security expert who brought this flaw to their attention wasn’t very old either.

Known only by her hacker pseudonym, CyFi was just 10 when she exposed what would eventually become known as a “zero-day exploit.”

Like Von Hassel, CyFi’s origin story begins with a gaming frustration — specifically her inability to quickly grow fruits and vegetables in FarmVille.

Rather than wait the mandatory 10 hours per crop cycle (like everyone else), CyFi figured out how to harvest produce much faster by resetting her phone’s internal clock.

In 2012, an 11-year-old boy from Canada initiated a series of distributed denial of service (DDoS) attacks against several high-profile governmental sites, including the National Institute of Public Health of Quebec and the Montreal police.

Depending on your political leanings, the young “hacktivist” had his heart in the right place. He was protesting some of the tuition hikes that ultimately led to the Quebec student protests that year.

Well-intentioned or not, however, his campaign resulted in several website outages and over $60,000 in damages.

Most of the kids on this list were either trying to make a statement or solve a personal problem (like growing fruits or accessing Xbox).

At age 10, he launched a career as an ethical hacker — dedicated to making the world a safer place for everyone. Paul even has his own firm, which focuses primarily on the growing threat of today’s increasingly connected smart devices — from phones to refrigerators to children’s toys.

In addition to being a cybersecurity ambassador, Paul has a black belt in Kung Fu. All the more reason not to mess with this kid.

How Children Expose the Real Dangers We All Face

This list is meant to highlight the gaping vulnerabilities that emerge as society continues to embrace the Internet of Things.

If a frustrated 5-year-old can circumvent security protocols implemented by Microsoft engineers, just imagine what kind of damage a veteran hacker can inflict.

We live in dangerous times. Whether as an individual or small business owner, it is more important than ever to take commonsense steps to decrease your exposure and keep your most sensitive information safe from prying eyes.

There’s no better time to get started than now — during National Cybersecurity Awareness Month.

For tips on how to shore up your digital defenses, check out the first article in this month-long series: #BeCyberSmart: Good Cybersecurity Habits By Which to Live.