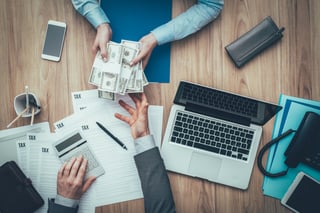 Taxes are forever changing as new political parties take office within federal and state agencies. Many candidates run on a particular platform to appeal to their constituencies, often related to changes to taxes. Change in the White House signaled the promise of tax changes, and now the Senate is debating them.

As a freelancer or other type of small business owner, you may be watching these tax changes very carefully to see how they impact your fiscal health and cash flow.  In online forums and social media groups, new and pending tax laws are being discussed at what has become a fever pitch. Here are the new tax laws that were introduced in 2017 and those that may be coming in 2018, what they mean, and how they may impact your business in terms of costs and profitability.

Things to Know About the Social Security Maximum and Medicare Tax

The Social Security tax rate is the same. However, the maximum amount of wages on which withholding is based has increased. It is now $127,200. This maximum will impact small business owners who are required to pay self-employment tax.

This additional tax must be withheld from employee pay that goes above $200,000. Self-employed business owners have the additional Medicare tax included in their self-employment tax calculations.

There are two accelerated depreciation benefits for businesses. First, Section 179 deductions of up to $500,000 per year enable businesses to more effectively plan for asset and expense purchases rather than depreciating them over time. Second, bonus depreciation has been reinstated. However, it will be phased out over the next few years. This reinstatement incentivizes businesses to buy new equipment.

As a business, it's important to be aware of your state's tax changes as well. While some may not impact your business, there are certain things like gas tax hikes that will hit your bottom line. The Tax Foundation has a complete list of the various state-specific tax changes. It provides a comprehensive look at what changed in each state as of July 1, 2017.

For example, some of the state tax changes included these differences:

While this is all helpful for tax planning for this year, what most small business owners are already pondering is the proposed tax changes from President Trump. Although the Republican party and some experts see a positive impact, other tax experts are not so sure. Here's what we know.

According to the Washington Post, there are changes for individuals, families, and especially businesses. One article noted, "The main goal of the House's “Tax Cut and Jobs Act” is to lower taxes on companies in an effort to make them more competitive and discourage them from moving abroad. The bill reduces the corporate tax rate from 35 percent to 20 percent and the rate for pass-through businesses down to 25 percent (with some restrictions)."

Small businesses do receive some advantages. For example, the final tax bill has a 9% rate on the first $75,000 in income for business owners who make $150,000 or less. However, that tax break isn't fully available until 2022.

Then, there are freelancers who have a lot to ponder in relation to this tax bill. According to a post from the Freelance Union, "freelancers could be significantly impacted by the elimination of certain tax deductions, especially for medical expenses, student loans, and state/local property taxes."

This type of change may lead many from this self-employed group to consider changing their business structure in 2018 and incorporate. This change would then allow them to become an employee of their corporation, thereby paying themselves differently. This could help avoid the potentially detrimental effect of some of these tax changes and allow them to keep more of their income instead of paying it out in taxes. Also, the taxes on the remaining business revenue will be at a lower pass-through rate.

In reality, the actual tax changes could be quite a ways off into 2018 or farther if the debate continues or other issues become the focus. Yet, it's still important to know what tax changes are on the table. This will get you thinking about a strategy for minimizing any adverse impact on your business. Knowing how to pivot or make the changes necessary to keep your tax bill low is ideal for maximizing the profitability you deserve.