Mind Reader Technology: Would You Like a Machine That Listens to Your Brain? 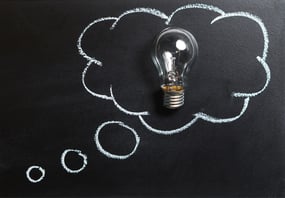 With the introduction of voice assistants such as Siri, Alexa and OK Google, users were finally liberated from the mouse and keyboard.

Instead of typing queries, users can simply speak their choices, whether they want to:

Voice-activated shopping has also flourished in recent years. In 2017, sales made through voice assistants approached $2 billion. By 2022, experts believe that number could exceed $40 billion — in just the United States and United Kingdom alone.

It’s hard to imagine how one could top that.

Yet, a new project out of the Massachusetts Institute of Technology (MIT) could take voice-activated payment technology to a whole new level.

A Voice Assistant That Doesn’t Need Your Voice

Researchers at MIT have spent the last several years investigating subvocalization — i.e., the process of speaking words in your head.

Subvocalizing is what most people do when reading a book. As their eyes travel across the page, they hear a voice that “says” each word out loud (in their brain). We also subvocalize during “conversations” with ourselves, or when we try to work out complex problems in our heads.

What researchers discovered is that the act of subvocalizing creates electrical signals in the brain that travel to the mouth, whether your lips move or not.

Using this research, the MIT team has just developed a new headset that can detect and interpret these signals. Known as AlterEgo, this wearable technology processes nonverbal information through neural networks to transform thoughts into words.

AlterEgo also works in the opposite direction — receiving audio information that can be transmitted directly to the brain via bone conduction . This process bypasses the ear’s infrastructure, allowing users to hear sound thanks to vibrations within the skull.

What Does AlterEgo’s Mind-Reading Capabilities Mean for Society?

Early trials of this new technology have been promising. For example, participants in MIT’s tests can navigate a Roku box or ask for the time with 92 percent accuracy.

That’s pretty impressive, especially when you consider how often Siri and Alexa misinterpret even the simplest of queries. With additional improvements, AlterEgo could be a game-changer for society at large.

Early applications will likely involve helping those with hearing or speaking disabilities. A technology like this, for example, could remove the need for cochlear implants for those who are deaf or hard of hearing. The ability to transmit thoughts into words would allow mute users to communicate without sign language.

There are also a host of military applications of this technology as well. Troops could coordinate movements without transmitting information over unprotected channels. For the mainstream population, a technology like this could make life easier and more convenient. AlterEgo might do to Siri what Siri did to the keyboard.

What does this all mean for merchants and retailers?

Could Mind Reading Become the Next Payment Technology?

Impulse purchases are great for business. They used to require that you physically be in a store and buy something you like (whether needed or not).

The Internet changed that by allowing you to shop from anywhere at any time. If you suddenly realized you “needed” a waffle maker (at 3 in the morning), you could buy one online with a few mouse clicks.

Voice assistants represented the next step up. They eliminated the need for clicks or keyboards, allowing shoppers to simply “speak” their purchases instead. Still, there is a deliberate, conscious element involved. You have to open your mouth and vocalize your desire to initiate a sale.

A payment technology that allows you to think your choices could make impulse buying far more impulsive. Imagine the following scenario:

Before you have a chance to change your mind, the sale has gone through. You could reverse the transaction later, but this will probably require using a phone, computer or in-person visit — that’s not very convenient.

When Will This Payment Technology Become Mainstream?

It might be a while. AlterEgo is still in the prototype phase, with a limited number of commands available. With time, however, the MIT researchers hope to:

Miniaturization will also play an important role. Although the AlterEgo headset is noninvasive, it’s still bulky. The technology probably won’t catch on until these brain-reading devices are small enough to fit in the ear.

Clearly, there are still a lot of kinks to work out. But as this technology matures, it could revolutionize the world — both in good and bad ways.

We’ll keep you posted on any new developments surrounding this mind-reading technology, especially as they relate to payment processing. For the time being, it looks like POS terminals, clunky keyboards and the spoken word are still the best ways to generate new sales.