Litecoin Versus Bitcoin: What are the Differences? 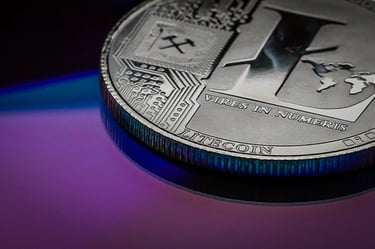 Introduced in 2009, Bitcoin was the world’s first-ever cryptocurrency.  It isn’t backed by any government. It’s not subject to banking regulations. It’s not controlled by any organization.

Instead, Bitcoin is a decentralized, digital currency that users can trade anonymously peer to peer. All transactions are encrypted and recorded in a public ledger, making Bitcoin largely immune to hacking or fraud.

Moreover, inflation and monetary easing are impossible with Bitcoin. By design, a set number of individual coins can be created (there will be 21 million in circulation once mining is completely finished). And these coins come into existence only through a complex problem-solving process known as “mining.”

There are more than 1,300 alternate cryptocurrency coins (“altcoins”), and most offer the same benefits listed above. Why do they exist? To answer that, let’s look at Litecoin, which presently is Bitcoin’s biggest contender.

What Does Litecoin Offer That Bitcoin Can’t?

Before diving into some of the key differences, it helps to understand the core similarity that most of today’s cryptocurrencies share.

Nearly all of them make use of “blockchain” technology — i.e., the sequential, chronological, encrypted accounting ledger that stores all transactions. In fact, Bitcoin’s anonymous creator introduced his or her blockchain code into the public domain so that others could copy the concept for future use.

And copy, they did. If Bitcoin technology is so amazing, what need is there for a competing cryptocurrency? There are many reasons, but the primary one is speed.

It’s not uncommon for a typical Bitcoin trade to take 10 to 30 minutes. That’s because the individual “blocks” in Bitcoin’s blockchain are quite small, resulting in bottlenecks every time two or more transactions get processed simultaneously.

Speeding up these transactions isn’t easy since the bottlenecks are already hardcoded into Bitcoin’s architecture. Some have tried to solve this by splintering Bitcoin into new forks, but this essentially results in a new type of cryptocurrency — even if it keeps the original name.

In solving Bitcoin’s speed limitations, the creators of Litecoin used a slightly different approach. They created larger blocks that could accommodate more transactions per unit of time. As a result, a standard Litecoin trade takes just 2.5 minutes instead of the usual 10.

How new coins are minted is another major difference between these two cryptocurrencies. Both rely on problem-solving algorithms to mine coins.

With Bitcoin, it’s possible to accelerate this process with more computing power. Whoever has the most servers (or fastest processors) can generate the most new coins, which has created an arms race among miners around the globe. By some estimates, Bitcoin mining consumes enough electricity to power all of Denmark.

By contrast, Litecoin uses a “scrypt” algorithm that doesn’t speed up as you throw more computing power at it. As such, Litecoin’s growth has been steadier, and its pricing has (historically) been less volatile.

What About the Other 1,300 Cryptocurrencies?

Litecoin is often billed as a faster, more stable alternative to Bitcoin. But why do all these other cryptocurrencies exist? There is no universal answer than applies to all competing altcoins, but most cryptocurrencies fall into one of the three categories below.

Although going from 10 minutes to 2.5 minutes is certainly an improvement, this isn’t good enough for widespread adoption — especially for retail.

Cryptocurrencies such as Ripple have tried to fix this. Aimed squarely at the retail industry, this relatively new altcoin has successfully pushed average settlement times closer to four seconds.

Ether is another cryptocurrency that can be anonymously traded peer to peer. The underlying blockchain technology (known as Ethereum) can be used for a wide range of applications, including smart contracts managed across a decentralized Internet.

Just as Bitcoin has reduced the need for bankers and regulators, Ethereum’s backers hope their technology can help reduce the need for lawyers and notaries.

Bitcoin’s anonymous creator set aside 1 million coins before making the cryptocurrency publicly available. This was an incredibly wise move given that Bitcoin’s price went from $0 to $20,000 in less than 10 years. This was essentially a risk-free investment with a huge ROI — and because Bitcoin’s code is open source, anyone can duplicate this process.

Take Dogecoin, for example. It started as a joke (based on an Internet meme). Five years later, it’s still trading at only $0.005 per coin. There are a lot of Dogecoins in circulation. So many, in fact, that the cryptocurrency’s market capitalization is currently $642 million.

Most cryptocurrencies fall into this last bucket. These newer altcoins don’t offer major advantages over Bitcoin, but given their low startup costs and huge profit potential, they attract a lot of attention from speculators.

What You Need to Know About Cryptocurrencies

There are many things to like about cryptocurrencies. They’re anonymous, secure and decentralized. And they’re becoming faster with each new release.

There are plenty of downsides as well. The market is largely unregulated. Prices are extremely volatile. And it may be a while before any cryptocurrencies become stable enough for mass adoption.