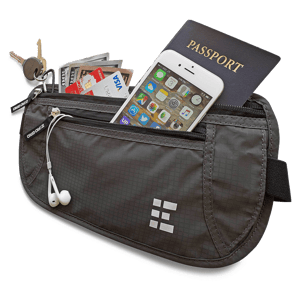 Radiofrequency identification (RFID) is a type of wireless technology used to communicate with items over short distances. Warehouses and stores, for example, often use RFID tagging to track inventory.

However, many credit cards use a subset of RFID technology — known as near field communication (NFC) — to initiate contactless payments. Instead of swiping or dipping their credit cards at POS terminals, customers can simply wave their NFC-enabled mobile device or credit card close to the reader — without making physical contact.

Yet, this convenience comes at a cost.

You may be vulnerable to a relatively new type of theft known as “RFID skimming.”

What Is RFID Skimming?

Thanks to technological advancements, it’s now possible for thieves to remotely connect with RFID-enabled credit cards and steal payment information wirelessly. In fact, there are even YouTube videos that show how easy it is to set up and use a skimmer.

It doesn’t necessarily matter if the original card is encrypted. Because all subsequent clones are exact copies of that original, they all inherit the same encryption.

Against this backdrop, there is a growing industry built around RFID-blocking wallets, pouches, and sleeves that supposedly protect people from credit card fraud and identity theft.

Is this technology effective at stopping crime?

The science behind RFID-blocking wallets isn’t very complex. They work by creating an electromagnetic enclosure around whatever you place inside. Known as a “Faraday cage,” this invisible force field prevents wireless signals from moving in either direction.

However, not all RFID-blocking wallets are created equally. Some commercial solutions are more effective at preventing crime than others — depending on the materials, thickness and protocols involved.

In addition, wear and tear can slowly degrade an RFID-blocking wallet’s efficacy. Even if you start with a high-quality solution, that doesn’t necessarily guarantee long-term results.

Are RFID-Blocking Wallets Worth It?

Yes and no. It really depends on your risk tolerance.

A solid wallet in good working condition can indeed prevent RFID skimming, but this is only if the credit card in question stays in the wallet. The moment you take it out — like at a POS terminal — that protection disappears. You’re just as vulnerable as everybody else in the vicinity.

This means a truly determined criminal can simply set up shop close to a checkout counter and slowly pick off victims one by one.

Moreover, the RFID antennas that criminals use to establish wireless connections are becoming stronger. In effect, a five-star wallet you buy today could become obsolete tomorrow.

Still, there’s a much bigger reason why RFID-blocking wallets haven’t become mainstream — at least not in the U.S.

RFID-enabled cards are quite common in many parts of the world. This is especially true in the EU, where contactless payments continue to increase in adoption.

In the U.S., however, only a tiny fraction of cards leverage RFID technology. Although it is estimated that millions of RFID-enabled credit cards have been issued, it only translates to less than 5 percent of credit cards in circulation.

Obviously, wallet manufacturers have a vested interest in getting you to believe that RFID skimming is rampant nationwide. In truth, there are few (if any) confirmed reports of actual victims in the U.S.

It doesn’t make sense to target the only occasional RFID victim when there are easier, faster and more profitable ways of stealing payment data — including through:

Whereas RFID skimming statistics are almost non-existent, these other types of theft account for billions in fraudulent losses every year.

If you’re truly worried about security, you should focus on these lower-hanging fruit instead. After all, that’s where thieves and criminals will be looking.

If You Can’t Live Without RFID-Blocking Technology

As a consumer, you probably don’t need to worry too much about RFID skimming. At the time of this writing, it doesn’t happen often. Plus, most credit cards offer zero liability coverage for fraudulent purchases.

Though if you’re truly risk-averse, you may still be tempted to shell out money for an RFID-blocking wallet or sleeve.

It’s possible to create your own DIY Faraday cage using nothing but heavy tinfoil. This approach is much cheaper than investing in commercial solutions. By adding additional layers of aluminum foil over time, you’ll always have the “latest” and “greatest” in electromagnetic protection.