How Quick is Quick Chip? 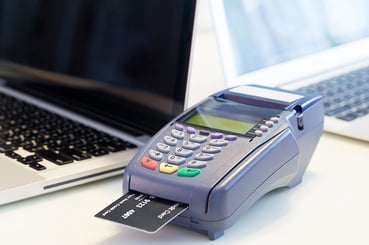 There’s a reason why the EMV credit card standard has been adopted globally. These chip-enabled cards are far more secure than their mag-stripe counterparts.

Whereas magnetic stripes are relatively easy to clone and forge, EMV cards are not. This makes in-store retail fraud more difficult. For a transaction to process successfully, the security chip must be physically present at the point of sale.

However, EMV credit cards do have a major drawback. They’re slow. Sometimes incredibly so.

For starters, customers can’t insert their cards into the terminal until after the cashier has finished scanning all of the items. Once inserted, the card can’t be removed until the transaction goes through.

Add to this the occasional confusion over how to authorize each purchase:

Finally, both parties must wait until the verification process is finished — complete with encryption, decryption and data transmissions. After all of these steps, it’s not uncommon for a standard EMV transaction to take 30 seconds or longer.

That’s assuming the verification process happens smoothly the first time. If it fails for any reason, the steps need to be repeated — which merely adds to the total transaction time.

For example, longer lines mean you can’t generate as many sales per unit of time. Longer lines also mean longer hours for your employees, and you’ll have to compensate them for overtime.

EMV credit cards may be more secure than swipe-and-sign plastic, but their slower processing speeds have created unnecessary — and often costly — friction elsewhere in the system.

Not surprisingly, merchants and customers alike have started to complain. Fortunately, the major credit card brands have finally taken note.

Quick Chip isn’t a new type of security chip. It’s not even a new type of credit card. Instead, it’s a software update provided by the Payment Card Industry. Once installed on your POS terminal, this patch speeds the verification process at the point of sale.

To understand how, let’s look at a normal EMV credit card transaction first.

When customers insert their cards, a traditional EMV reader doesn’t retain any payment data internally. It merely transmits this encrypted information to the processor.

With a Quick Chip-enabled terminal, credit card data is temporarily stored within the merchant’s payment environment. This means customers can insert their cards at any time during the checkout process, even if the cashier hasn’t finished scanning all the items on the conveyor belt.

The distinction may seem trivial. However, this approach reduces the total transaction time to a few seconds — not half a minute. This could be a game-changer for American retail.

Despite faster transaction speeds, Quick Chip technology has its drawbacks.

With its greater emphasis on transaction times, EMV Quick Chip technology carries certain risks for both merchants and customers.

Unlike with normal EMV terminals, Quick Chip-enabled readers store payment data locally. This information is encrypted and stays only temporarily, but the fact that it is present means it’s technically accessible to thieves and hackers.

In addition, customers are allowed to remove their cards prior to authorization. As such, it’s theoretically possible for them to be overcharged (or claim that they were).

How likely are these scenarios? It’s difficult to say since the Quick Chip rollout is still relatively new.

But if you’re truly risk averse, there are steps you can take to minimize your security exposure — without sacrificing speed. For example, many retailers use tokenization and point-to-point encryption to make it harder for criminals to access customer payment data.

After all, it’s a software update that doesn’t require any hardware upgrade or other major investments. As long as your payment processor supports Quick Chip, you can be up and running in a matter of minutes.

This setup ease partially explains why more than 35,000 merchants have already embraced Quick Chip technology. And the numbers continue to grow.

If you’d like to increase the speed of credit card processing in your retail store, we’re here to help. To get started, schedule a free consultation with our merchant services team today.