Harpooning and Spear Phishing and Spoofing, Oh My! 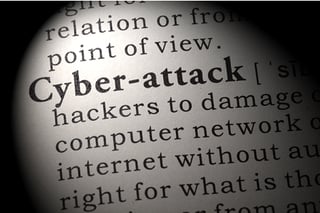 How many emails about possible security threats from your IT team got you scratching your head or saying, “Wait, what?” More now than ever before, especially with the Internet of Things (IOT), we hear cyber security terms tossed around in the news, on the Internet, and at work. How can we reduce fraudulent risks if we don’t know these security threats exist or what they mean?

What is Cyber Security?

Cyber security is the process of protecting information entered, stored, and transported on the Internet from unauthorized use and exploitation by hackers. Now that we have that covered, let’s continue with additional terms.

Botnet – A large collection of compromised computers used to create and send spam or viruses or to launch a denial-of-service attack.

Denial of Service – An assault on a network by a single source that floods it with so many requests that it shuts down or operates at a significantly reduced rate.

Firewall – A system that establishes a barrier between a trusted, secure internal network and an untrusted network to control incoming and outgoing traffic.

Hacker – An unauthorized user who attempts to or gains access to a computer system for malicious reasons or financial gain.

Harpooning – The process of a hacker gleaning information from social sites to impersonate executives and target employees in their organization to provide sensitive personal information.

Malware – A malicious software designed to compromise a system to infiltrate, damage, or obtain information without the owner’s consent.

Screen Scraper – Similar to Keyboard Logger, this virus or physical device logs information sent to a visual display to capture passwords or other personal information.

Spear Phishing – An email attack on a specific organization or individual, which is not typically conducted by a random hacker, but more by a thief out for financial gain, trade secrets, or military information.

Spoofing – An attempt by a hacker to gain access to a system by posing as an authorized user using a fake sending address.

Spyware – Software that is secretly installed into a computer system without the knowledge of the system owner or user.

Trojan Horse – A computer program appearing to have a useful function, but also has a hidden and potentially malicious function that evades security mechanisms.

Worm – A malicious self-contained computer program that replicates itself and spreads to other systems.

If you’ve heard a term that wasn’t covered here, or just have a thirst for knowledge, check out these other resources:

As long as we have the Internet and all things connected to it, cyber security will continue to be a growing concern and a massive effort by all parties involved. BluePay’s expert security team employs the most advanced protection methods to keep our merchants, partners, and financial institutions safe from fraud and data breaches.