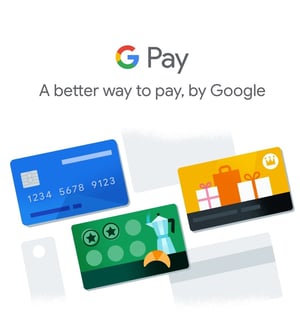 There wasn’t a whole lot of fanfare surrounding the 2011 launch of Google Wallet — a mobile payment technology that allowed users to shop in stores or send money to friends and family members.

Google Wallet may have been a cool service, but there simply wasn’t a burning need for what the platform offered.

Worse still, adoption of this virtual wallet was quite slow. Part of this stemmed from the complicated process involved when shopping in person:

All of this assumed the merchant had a near field communication (NFC) terminal that could accept contactless payments from smart devices. In 2011, very few retailers did.

This changed when Apple introduced its own mobile payment technology — Apple Pay — in 2014.

The core features were essentially the same as Google Wallet, but Apple wisely chose to establish merchant relationships before introducing its new service. By bringing more retailers on board, the company was able to pave the way for faster and wider consumer-side adoption.

Better still, Apple Pay came pre-integrated with later versions of the iPhone and iPad. This prompted Google to respond with Android Pay.

Android Pay wasn’t an innovative breakthrough in mobile payment technology, but this new service was able to ride on Apple’s coattails now that more vendors were set up for NFC payments.

Plus, users didn’t have to download a dedicated app since Android Pay came automatically integrated with all later Android devices.

But Google now had a branding problem:

Enough users were confused by these somewhat overlapping payment technologies that Google decided to bring both services under one unified platform.

How Is Google Pay Different From Google Wallet and Android Pay?

Google Pay is being heralded as a cross-platform payment system that works on any device, browser and operating system:

Google Pay even offers in-phone support when using apps such as Fandango or Airbnb.

Moreover, users can upload as many credit cards as they want to their accounts, and they can manage all of this payment information through a single Google-tied login.

In addition, Google Pay delivers some pretty useful features such as:

The Benefits of Google Pay Solutions — for Customers and Merchants

The motivation behind this rebranding is clear: Google wanted to eliminate confusion. By bringing Google Wallet and Android Pay under one roof, the company has moved closer to a universal payment option that works across the board (except for with cash-based businesses).

However, customers also benefit from this move:

For example, shorter (and faster) lines mean you can generate more sales per unit of time. Or alternatively, you can generate the same number of sales — while scaling back your business hours.

Are these benefits worth celebrating? Yes, but don’t get too excited. Remember that Google Pay is simply a cleaner version of payment technologies that already exist. It’s ultimately a rebranding that clears some unnecessary clutter.

That being said, embracing Google Pay is easy — there’s no reason not to try it.

Getting Started With Google Pay

If you’re already using Android Pay or Google Wallet as a consumer, very little will change about your day-to-day experience. Both services now exist under a single logo, and you can still:

How do you sign up for Google Pay as a merchant? If you already accept contactless payments at your brick-and-mortar store, there’s nothing you need to do differently. Technically, you’re already set up for Google Pay.