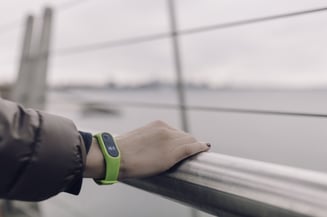 With nearly 20 percent market share, Fitbit is arguably the most popular wearable technology in the world. These personal fitness trackers can monitor everything from your heart rate to steps taken to sleep patterns.

With more than 25 million active users, Fitbit continues to rake in billions of dollars every year — all through sales of its wearable devices.

But the company believes its Fitbit can become more than just a fitness tracker. In 2018, it added mobile payments to its growing line of wearable tech.

The question is, will this gamble pay off?

The basic concept behind Fitbit Pay isn’t that revolutionary. It joins a long list of wearable payment technologies, with Apple Watch being the most famous. Since 2014, more than 33 million customers have purchased this iOS smart watch — and those numbers continue to grow.

So, demand for wearable payments is obviously there.

However, Fitbit Pay can piggyback on Apple’s success without going through the birthing pains that normally accompany new innovations. That’s because both Fitbit Pay and the Apple Watch leverage the same near field communication (NFC) technology that allows for contactless payments.

Users simply connect a credit or debit card to their chosen device. The next time they’re at a checkout counter, they click a few buttons and hold their watch or fitness tracker next to the NFC reader. The transaction goes through, without contact between the wearable technology and the credit card terminal itself. Everything happens wirelessly.

The true beauty is that contactless payments are device-agnostic:

Fitbit Pay is currently available on a limited number of devices, including the Ionic and Versa, but mobile payments will likely become a staple feature of future Fitbit releases.

A growing number of wearable technology manufacturers are trying to cash in on the mobile payment craze. Samsung, for example, already has a line of payment-enabled wearables. And relative newcomer Garmin is making substantial progress, although its watch payment technology is built on top of Fitbit’s.

In other words, the competition is heating up. Each manufacturer will have to work harder to distinguish itself from the rest of the pack.

Will Wearable Payments Become the Next Big Thing?

There’s no doubt that wearable technology is on the rise. In the fourth quarter of 2017, Apple sold almost 7 million of its smart watches during the holiday season.

Again, demand is clearly there. But whether this technology becomes truly mainstream remains to be seen. After all, you can already initiate contactless payments through mobile devices such as smartphones and tablets. Plus, there are many other payment technologies on the horizon — such as mind-reading devices that can transform thoughts into ones and zeros.

However, Fitbit is probably OK with all of these developments, as mobile payments aren’t a defining feature of its highly successful fitness trackers. They’re an add-on that comes preinstalled.

Some people will use their Fitbits to shop. Others won’t. Either way, Fitbit has new customers. If those customers decide to make mobile payments through their devices, the company gets to keep a tiny slice of that sale.

What Does Fitbit Pay Mean for Your Business?

If your payment environment is already set up to accept NFC payments, check with your payment provider to see which mobile wallets and wearable devices you have the ability to accept.

If you upgraded your POS terminal to the chip card reader, there’s a good chance your terminal is already NFC-enabled.