Cybercrime Risk to Rise in 2018: What You Can Do 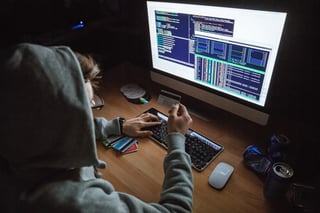 You've heard about cybercrime for many years now. Logically, with more knowledge and technology in place, you might conclude that cybercrime activity may decrease in 2018. Instead, it's set to rise this year. By all predictions and available statistics, there appears to be more risk for cybercrime than ever before. With more customers shopping and paying for products and services online, it's something you need to address to keep your customers and business safe.

According to the World Economic Forum’s Global Risks Report 2018, cyberattacks are now the third greatest global risk just after natural disasters and extreme weather. That's because business cyber breaches have doubled in the past five years.

By all accounts, the increase in cybercrime will be costly. Cybercrime damages are estimated to cost the world $6 trillion annually by 2021.This is compared to $3 trillion in 2015. That means cybercrime will become more profitable than the global trade of all major illegal drugs combined. Additionally, Cybersecurity Ventures estimates ransomware damage costs will hit $11.5 billion in 2019, with a business experiencing a ransomware attack every 14 seconds.

Second, the growth in the Internet of Things (IoT) market will add unmanaged risk to the situation. The Global Risks Report 2018 previously noted that IoT devices will go from 8.4 billion in 2017 to 20.4 billion in 2020. These devices are viewed as attractive targets for hackers.

Fourth, current regulations have furthered the complexity of critical asset management, making it easier for cybercriminals rather than stopping them.

Finally, unmet board expectations within many companies will lead to more cybercrime.

Why the Spike in Cybercrime Risk?

In an interview for SHRM, Anthony Dagostino, global head of cyber risk at Willis Towers Watson, explained, "Really, the root of the problem is companies are [moving] so quickly—getting connected to social media, getting more connected to more places, expanding their footprint—that companies are losing track of their critical assets."  The problems are exacerbated by sophisticated hacking software and an inability to get global cohesion about anti-hacking regulations. Instead, there are gaps that these criminals exploit.

How to Protect Your Business and Customers from Cybercrime

Despite the ongoing risk, you can still leverage some proven methods to stop cybercriminals. Those include educating employees and your customer base about what to look for and how hackers work. With more people working with you to be on alert, it comes pretty close to the idea of safety in numbers. Also, you'll need to continue adding to your IT security measures. This includes additional layers of security as they become available and regularly install updates to all software. Plus, you'll want to find ways to reduce storing customer data.

It also helps to employ people who are skilled to combat cybercrime. You can either hire people in-house, use outsource or freelance experts, or regularly bring in those who conduct security audits. All three types of skilled cybercrime professionals can assist you and work within various budgets and company sizes.

However, there does happen to be a shortage of these types of skilled professionals. According to Hacking the Skills Shortage, a global report outlining the talent shortage crisis and found that 82% of the IT professionals surveyed stated there are not enough workers with cybersecurity skills. Some companies are even hiring ex-hackers to get the help they need in protecting data.

Therefore, it may be well worth making an investment in training and education. This strategy could benefit your skilled workers or freelancers as they expand their skill set, while also assisting the company with lowering its cybercrime risk.

U.S. cybercrime regulations are on a state-by-state basis. However, with new laws coming in May 2018 in Europe, there is hope that it will set a precedent for countries like the U.S. to join for a global force against cybercriminals. The European Union's General Data Protection Regulation (GDPR) will help to standardize privacy laws across Europe. Also, it will issue fines of up to 20 million euros to foreign and domestic companies who allow data breaches to occur.

New Security Technology on the Way

New anti-hacking technologies will be introduced in 2018 that could also be worth the investment. Many of the new anti-cybercrime technology is now incorporating artificial intelligence and machine learning. This is because these technologies can process information at a much faster rate, as well as uncover patterns that could identify a possible cybercrime attack. Humans have been unable to work so quickly so this would provide a great defense.

However, human experts still need to oversee this new technology to understand how to best incorporate it for companies of all sizes.