Cardless ATM — How Does It Work? 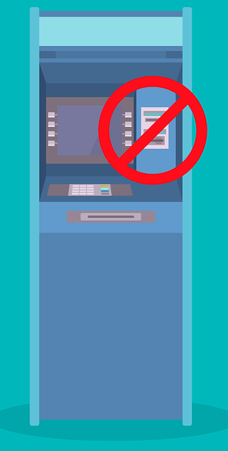 It's a familiar ritual known to everyone who has ever needed to withdraw cash from an ATM:

Yet as established as this routine is, it could become a thing of the past.

Chicago's BMO Harris Bank is introducing a very different type of ATM — one that doesn't require users to swipe or insert their debit cards. Instead, users withdraw the cash they need using smartphone technology.

This isn't the first example of cardless ATMs. Wintrust Financial started a pilot project of nearly 200 such machines in 2013. Though with 750 cardless automated tellers scheduled for the greater Chicago Area, BMO Harris Bank’s launch is one of the biggest to date.

How do these cardless machines work? Equally important, why bother launching these ATMs?

The exact technology varies, but most machines rely on native smartphone apps that are tied directly to the issuing bank. Users can preset their withdrawal amounts, and the app generates a unique QR code readable by the ATM's scanner.

After the bank’s software verifies the account and QR code, it releases the cash, and the transaction is complete.

Yet why would any bank invest money to upgrade ATMs for cardless withdrawals?

There are several key benefits to this smartphone-based approach, including:

Cardless withdrawals take about 15 seconds from start to finish. This is in sharp contrast to traditional card-based transactions that can take anywhere from 45 seconds to several minutes.

Debit card information isn't stored directly on the smartphone. Even if a thief gets his hands on a user's device, he doesn't necessarily have access to that user's banking data.

In addition, cards can occasionally get stuck. Unlucky users may have to wait an entire weekend before getting in touch with their banks to resolve the issue.

Cardless ATMs join a long list of mobile payment options that have already taken the retail and restaurant industries by storm. American consumers are becoming less reliant on traditional credit cards.  Integrating cash withdrawals into the cardless-payment ecosystem seems like a logical next step as more users leave their plastic at home.

Do You Need to Integrate Cardless ATMs into Your Business?

Cardless ATMs are not currently available for individual merchants. Most hardware upgrades come from the issuing banks, so there isn't anything you need to do just yet.

However, this story highlights America's growing desire for a truly unified system that places all payment capabilities into a single device — i.e. the modern smartphone.

If your business doesn't currently accept payments via mobile devices, you should seriously think about updating your infrastructure with Apple Pay, Google Wallet, or any of the other mobile solutions on the market.

To learn how we can help you get started accepting mobile NFC payments, speak with a member of the BluePay team today.