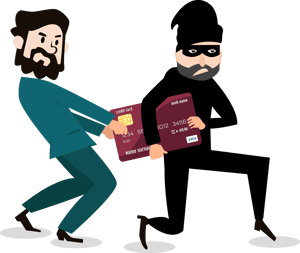 In the United States, we hear about credit card fraud all the time — usually presented as horrifying statistics. For example:

Ultimately, these are just numbers. It sometimes helps to put faces to these statistics to truly understand the scope of this growing problem.

1. You Only Live Twice

Li Ming was a graduate student from China. During his stay in the U.S., Li racked up an inordinate amount of legitimate credit card debt. Rather than pay off his balances, however, he decided to fake his death. Li even published an obituary in the newspaper.

He then tried to apply for a new driver’s license and several other credit cards, hoping the popularity of his Chinese surname would allow him to fly under the radar. It didn’t work, and he was ultimately busted. In addition to credit card fraud, Li Ming was also charged with identity theft (against himself).

While working as a busboy, Abraham Abdallah picked up a recent copy of Forbes’ list of richest Americans. With some clever Internet research and cyber hacking, he was able to steal credit card information from several high-profile victims including:

Abdallah was ultimately captured and jailed for his crimes, but not before managing to buy countless luxury goods and two brownstones.

Usually when someone receives mail for the previous occupant, it’s returned to the post office. Not 34-year-old Nicola Marlton-Thomas, recent widow of an Afghan war hero.

Instead, she did some investigating and realized that the previous occupant (Eunice Lees) had been dead for two years, with no named heirs. Not only did Marlton-Thomas open new credit cards in the name of the deceased, but she also wiped out Lees’ bank accounts.

However, it wasn’t the £14,000 in fraudulent charges that tipped off investigators. Rather, it was the nature of the purchases. Dead or alive, 91-year-old retirees don’t normally splurge on camping gear and airline travel.

In the mid-2000s, LifeLock was one of the most popular identity theft prevention services in the country. To prove how secure its protection was, company CEO Todd Davis published his Social Security number on marketing materials and advertisements.

How’s that for confidence?

Davis was subsequently hacked at least 13 times, with countless credit cards and bank accounts created under his name.

The company’s ID protection obviously didn’t work for Davis, but it also didn’t work for many others — which is why the FTC fined LifeLock $12 million “for deceptive business practices” and “failing to secure sensitive customer data.”

Credit Card Fraud Can Happen to Anyone

No one is 100 percent immune from credit card fraud:

But as a consumer, there are common sense strategies you can use to protect yourself.

And if you’re a business owner looking to safeguard your payment environment, we offer a range of tools that can help reduce both the severity and frequency of fraudulent attacks.

To learn more, schedule a free consultation with our merchant services team today.